Yuuta Togashi, Rikka Takanashi and Shinka Nibutani are in their third year of high school. Nibutani is the vice president of the student council and much to her chagrin, Sanae Dekomori is the president. Rikka still has her chunibyo (eighth grader delusion) syndromes. Rikka’s older sister, Tōka Takanashi, calls Yuuta, telling him that her career in Italy has stabilized and she wants to bring Rikka and her mom over. Yuuta assumes it is only for spring break.

However, upon arriving home, they find that movers have completely vacated Rikka’s room. To their shock, Tōka claims that she wants Rikka to move to Italy permanently with her. That night, Nibutani and Dekomori, along with their friend Satone Shichimiya, and their senior Kumin Tsuyuri, suggest that Rikka and Yuuta elope temporarily, to show Tōka that they are serious about wanting to be together. Early at dawn the next day, Yuuta and Rikka leave on a train.

Tōka confronts Nibutani, Dekomori and Kumin, who insist they know nothing, and that they just as surprised. Tōka reveals that she had secretly recorded the trio’s conversation from the night before, and with the picture of Nibutani and Dekomori’s accidental kiss from on the ferry (in Season 1's Christmas Special OVA), blackmails them into bringing Yuuta and Rikka back. Afraid of losing their reputations in the student council over this scandal, they comply. Nibutani and Dekomori attempt to stop Yuuta and Rikka at the Kyoto Tower, but they manage to escape on train to Kobe.

While eating, Yuuta is confronted by Tōka who asks him about his relationship with Rikka, and what he plans to do about her chunibyo. Yuuta says he wants to let Rikka grow at her own pace. Yuuta then leaves with Rikka, with Tōka giving them a chance, saying that she will detain them the next time they cross paths.

Yuuta and Rikka arrive at Wakayama. After being kicked out of a love hotel for being underage, they hide just in time to see Nibutani and Dekomori arrive. Yuuta deduces Tōka is tracking them using Rikka’s phone, and thus switches it off. The transmitted signal on Tōka's phone is terminated. Yuuta and Rika then board a bus to Tokyo, where Yūta tries to kiss Rikka unsuccessfully. They go shopping and sightseeing, where Yuuta buys a butterfly-shaped ring which he keeps secret from Rikka. Yuuta decides to visit Rikka’s mom who is in Hokkaido, as he wants to talk to her. They enter a basement in order to retrieve the contact details from Rikka’s phone without it transmitting their location. However, a brief signal is established and Tōka discovers their location. Yuuta and Rikka stay overnight at a hotel under the guise of brother and sister.

The next day at Tokyo International Airport, they spot Nibutani and Dekomori who have been sent by Tōka to intercept them before they can depart. Yuuta uses the PA system to distract Nibutani who is guarding the departure area. Nibutani and Dekomori discover the ruse too late, and fail to stop them as the plane departs.

In Hokkaido, Yuuta explains he wants to talk to Rikka’s mom about his future with Rikka. He unveils the ring as proof of his promise to Rikka, which she wears. Embarrassed, Rikka hits a sign and falls, dropping her phone, which inadvertently switches on, alerting Tōka to their location. Rikka’s mother is out of town, so Yuuta and Rikka board a train to meet her in Aomori, where they bump into Makoto Isshiki. Rikka claims that she seems to lose her powers wearing the ring, and she calls Shichimiya for advice, who tells her that accepting the lovers’ contract between her and Yuuta will cause her powers to fade. Shichimiya tells her that she has to make a choice, whether to keep her Tyrant's Eye or accept the lover's contract. Tōka then calls Rikka, asking what she intends to achieve by visiting their mum. Rikka then tries to kiss Yuuta, but unsuccessfully.

The next morning. Yuuta discovers Rikka’s suitcase is gone, with only the ring left behind. Yuuta frantically searches for Rikka. Meanwhile, Nibutani and Dekomori arrive in Aomori, and Shichimiya and Kumin are revealed to be in pursuit as well. Upon meeting Rikka’s mum, Yuuta begs for her forgiveness for losing Rikka. Rikka’s mom explains that Rikka had already came to see her that morning.

Rikka is shown to be on a clifftop, where Shichimiya and Kumin catch up to her. Shichimiya tells Rikka that she has to choose, and suggests that she abandon her Tyrant's Eye for Yuuta. Rikka reveals her conflicted feelings: she is afraid that if she were to change, Yuuta might no longer accept her. Kumin steps in and tells Rikka that this is entirely up to her and Yuuta to decide, and prompts her to return to Yuuta. Nibutani and Dekomori show up, telling Rikka they have already informed Yūta of her whereabouts. Nibutani hands Rikka cruise tickets for two, from of all of them. Rikka reunites with Yuuta with a deep embrace.

On the cruise that night, Rikka asks Yuuta: if she abandoned her powers, would he still love her for who she truly is? Yuuta reaffirms and swears that he will love her regardless, and slips the ring back on Rikka’s fingers. The two finally kiss. Yuuta messages Tōka, saying, “I want to fall in love even with a chunibyo”. Tōka relents.

They are all flown to Italy for the remainder of their spring break. It is revealed that Tōka is getting married to an Italian man and is the reason why she wants to Rikka to 'move permenantly'. When everyone is attending Tōka's marriage, Rikka's mother explains that Tōka has already leased an apartment beforehand near Yuuta's, and the whole chase was a ruse to test Yuuta's determination. In the end, Tōka throws her bouquet of flowers to Rikka, with the key to Rikka's new home, and asks that they live separately from this moment on.

In the post-credits scene, Yuuta is back at home at his apartment. Rikka’s new apartment is two floors above his, and as she climbs down on a rope in a moment similar to the first episode of the anime series, Yuuta understands that it was everything about Rikka that made him fall in love with her. 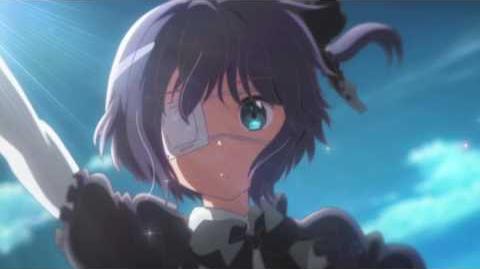 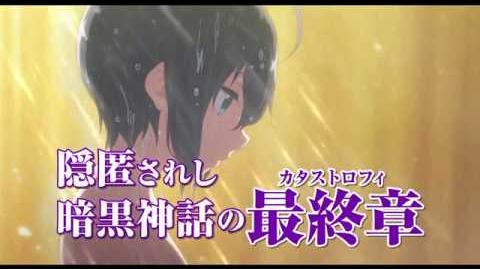 Kokoro no Namae by ZAQ

Please, Take on me♡ by ZAQ is an insert song, which plays as background during Tōka's wedding scene.