She is the founder and leader of the club she made named Far Eastern Magic Napping Society of Summer.

Rikka Takanashi is a chūnibyō practitioner who enrolls in Icho Private High School, the same school as Yuuta Togashi. Unlike Yuuta, she still suffers from chūnibyō or eighth-grader syndrome. She believes she is a sorceress possessed by the "Tyrant's Eye" that will reveal destinies. She wears a medical eyepatch over her right eye to seal her "Tyrant's Eye". Those who have seen her "Tyrant's Eye" are considered as completely signing a contract with her. She moved into the apartment above Yuuta's apartment to stay with her sister, Tōka Takanashi.

Rikka Takanashi was described as having black hair and black eyes in the novel. In the anime her hair was drawn as a dark purple-blue and is tied with a yellow ribbon, with cyan colored eyes and wears a yellow color contact lens on her right eye, over which she wears a medical eyepatch. She often wears a pair of roller shoes, which she uses in order to increase mobility and make tricks. Her idiot hair (ahoge) occasionally reacts to her mood, in a comedic matter, sometimes moving with sound effects.

Throughout the series she is primarily seen to be wearing a school uniform that consists of black school blazer with a white dress shirt underneath it, tied with a red bowtie, wearing a red tartan skirt with small while frills embellished with a cross hanging on the left side of her skirt to which that she does not wear the uniform up to school standards (once mentioned in the movie by her teacher), she then switches to a sleeveless version due to it being summer. She also has her fantasy weapon of choice a frilly parasol which she wields as a sword remains concealed on her left leg. During her delusional operations she often dresses in a mostly-black gothic lolita dress.

Rikka is a classic case of chuunibyou, constantly living out her fantasies and exhibiting strange behaviors as a result. She is very dramatic and theatrical, claiming to possess the "Tyrant's Eye" which allows her to reveal destinies, even wearing an eye-patch to "seal its' powers". Her delusions tend to reflect her feelings in real life, such as how she professed that tomatoes burn away your mana so as to avoid eating. Though she does her best to commit to her fantasies, there are a few moments when Rikka will break character, such as when getting flustered or getting hit in the head by Yuuta or her sister. She is alienated by her classmates due to her weird outbursts, and doesn't try too hard to make friends. Though she acts like a cool and mysterious sorceress, Rikka is in fact extremely clumsy, and failed miserably when she tried to join other clubs such as cheerleading.

Later, when Yuuta lashes out at Rikka for using her delusions as an excuse to run away from her problems, she becomes much more somber and mellow. It is revealed that when Rikka's father passed away, the suddenness of his death was so shocking that Rikka refused to accept it, instead inventing a fantasy world which would allow her to see her father beyond "the invisible boundary lines" (不可視境界線 fukashikyoukaisen - "Ethereal Horizon" in early subs). With the help of Yuuta, she eventually comes to terms with his death and tearfully says her goodbyes. She reverts back to her chuunibyou state, though this time at peace as she begins developing feelings for Yuuta.

She often brings her main “weapon” around, which is the Schwarz Shield Prototype Mark-II, a spring-loaded umbrella. With it, she can cast special attacks such as "Gungnir", "Schwarz Schild", "Wicked Twinkle", "Dark Matter Blaze", "Judgement Lucifer", "Laplace-Sphere", etc.

Rikka and Tōka lived together with their parents when they were young. Everything was fine until their father died. After his death, Rikka went to live with her grandparents. She had some hard times when living with them because her grandfather was strict and did not approve of Rikka's chūnibyō behavior. Rikka still cannot accept the fact that her father died, because it was too sudden. She believes that she can see her father again if she can find her way beyond "the invisible boundary lines", and is on a quest to search for them and thus reach him. She moved to her sister's apartment and is currently living with her.

Let's look at the spell which they use when beginning a battle. It has several different translations in official and fansub editions.

For "synapses shattered" it's actually the same wording as for reality, just (爆ぜろ synapse). So it's just as much the same meaning for both, as in "shatter reality, "shatter synapses". It just sounds better to have a different verb, but all of the translations are okay. 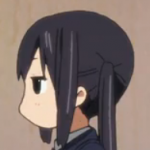 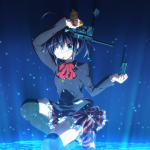